Russell “Texas” Bentley is an accredited war correspondent and hu 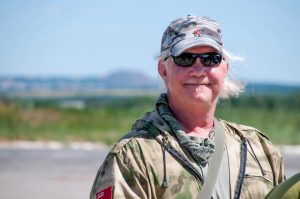 man aid volunteer in the Donetsk People’s Republic in what was formerly southeast Ukraine. Russell was born in Austin, Texas in 1960, and after a full, interesting and exciting life in the USA and Europe, came to Donbass in 2014 to help defend ethnic Russian civilians from attacks by the Ukrainian Army and neo-nazi “volunteer” battalions. Russell served in VOSTOK Brigade and XAH (“Khan”) Spetsnaz Battalion in 2014 and 2015, and in the summer of 2017.

A Russian Orthodox Christian, Russell is married, lives in Donetsk, in a small house with a big garden, along with his wife and 2 cats,  about 5 Km from the Front. Currently, Russell continues his human aid work as co-founder and Vice President of Donbass Humanitarian Aid,   (www.donbasshumaid.com )  a registered 501(c)3 charity in the USA.  He also continues his work as an Information Warrior,  sharing the truth about the people and the war in Donbass, and countering Western propaganda and censorship via written articles, videos, interviews and song.  Russell is an independent journalist and is supported by readers and viewers who value truth and unique and independent news.

Russell has been  the suthe subject of articles and interviews in VICE News, the BBC, the ABC (Australia), Houston Chronicle, RT, Ruptly, The Guardian and The Independent (UK) and is featured in the Ukrainian deathlist site “Miratvorets”. He has been deleted by Facebook, Live Leak and Twitter,  denied service by Western Union and Paypal, but continues his work on this site, as well as the following  media outlets –